A few years ago, while examining a patient at a nursing home her son noted to me that she talked about seeing things in the scotoma or non-functioning field of vision with regard to Macular Degeneration.  Since she was elderly, the son questioned whether this was a function of a form of dimentia or was this something to do with her eyes.  I noted that I would look up the condition as I had read a few things about it.  Upon looking up Phantom Vision, this condition that is quite normal and called Charles Bonnet Syndrome (CBS).  I found a lot of information on it.  Also, there is no consistent cure but the symptoms may last for a time and go away. Below, I have noted some information on the condition and 4 websites on the condition.

It is noted to be in up to 25% of the cases of Macular Degeneration and 7% in Glaucoma.  Interesting, and an interesting topic for me to talk about with my patients.  Maybe many older adults may not want to discuss it due to the fact that they may be thought of as having some form of dementia.  Due to brain function, but not due to loss of brain function but to the Macular Degeneration, Glaucoma or other conditions in which a person is partially or completely blind - similar to phantom limb syndrome.

Here's a link to an article published October 31, 2021 regarding incidence in Glaucoma: https://www.reviewofoptometry.com/news/article/glaucoma-patients-more-likely-to-develop-cbs

http://www.charlesbonnetsyndrome.org/index.php/faq/63-is-there-a-cure-for-cbs
Is there a cure for CBS?
Presently, there is no universally effective cure for CBS.
Sometimes, improvement in one's vision can bring an end to CBS.
Sometimes, utilization of visual aids and optimal lighting can reduce symptoms.
Sometimes, behavioural interventions can be effective.
Sometimes, increased socialisation can be beneficial.
Sometimes, certain psychotropic medications can lead to a cessation of CBS symptoms.
However, none of the above interventions have been found to work in the majority of cases. 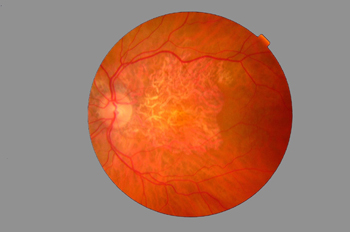 From the above website:
About 20% of individuals with vision loss, from any cause, see life-like images from time to time that they know are not really there. This phenomenon is named Charles Bonnet Syndrome (CBS) after the Swiss naturalist and philosopher who first described it in 1760.
The phantom images of Charles Bonnet Syndrome are common, pleasant, everyday things like flowers or animals or people and the experience is somewhat like looking at a picture or watching a silent movie in color. The images are in full color and they may move but there is no sound, smell, or contact. It's important to know that Charles Bonnet Syndrome is related to vision loss, not to loss of mental capacity.

From the above article:
Charles Bonnet Syndrome might also linger for only a year and then go away, or it might remain with someone indefinitely, as in the case of Zeidman, who has seen images “constantly” for eight years. “It’s actually quite annoying,” says Zeidman, who tends to see buildings, faces, or “little girls running around.”

3)http://www.triadpublishing.com/eyecarereports/maculardegeneration-book.shtml
From the above article:
Some people whose vision has been very poor (from AMD or from other causes) sometimes have visual hallucinations; they see things (objects or patterns) that are not really there. These phantom visions can last from a few seconds to a minute or so and then disappear. Such hallucinations are fairly common and they are not serious, but they are startling. Even so, people who have them generally don't talk about them freely.

4)http://www.ncbi.nlm.nih.gov/pubmed/1816537
The abstract of the above article:
The Charles Bonnet syndrome is a condition in which individuals experience complex visual hallucinations without demonstrable psychopathology or disturbance of normal consciousness. An analysis of the sixty-four cases described in the literature reveals that the syndrome can occur at any age though it is more common in elderly people. Reduction in vision, due to peripheral eye pathology as well as pathology within the brain, is associated with the syndrome. Individual hallucinatory episodes can last from a few seconds to most of the day. Episodes can occur for periods of time ranging from days to years, with the hallucinations changing both in frequency and in complexity during this time. The hallucinations may be triggered or stopped by a number of factors which may exert their effect through a general arousal mechanism. People, animals, buildings, and scenery are reported most often. These images may appear static, moving in the visual field, or animated. Emotional reaction to the hallucinations may be positive or negative. Several theories have been proposed to account for the hallucinations. This paper highlights the sensory deprivation framework, with particular emphasis on the activity in the visual system after sensory loss that produces patterns of nerve impulses that, in turn, give rise to visual experience.

This article is a study of 13 children ages 9 to 18 in England that had congenital eye diseases which compromised their central vision.  They all were noted to have Charles Bonnet Symdrome.  The author discussed the need to vision professionals to recognize this syndrome so that those having this condition be reassured it is normal.